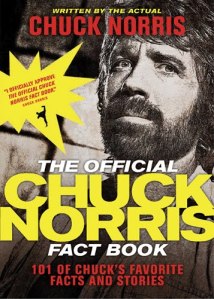 Hundreds of thousands of humorous Chuck Norris facts have been published, traveled around the globe via the Internet, and gained an international audience of millions. Chuck Norris facts are a quirky, extremely popular Internet phenomenon that has entertained fans from all over the globe. In the last several years, Chuck Norris has been asked repeatedly from the heartland of America to the battlefields of Iraq and Afghanistan, “Which facts are your favorites?” For the first time ever, in The Official Chuck Norris Fact Book, Chuck gives readers not only his favorite “facts,” roundhouse-kicked by the man himself, but also the stories behind the facts and the code by which Chuck lives his life. Fans from every corner of the globe will enjoy both the fanciful and inspirational from one of the world’s great action heroes. This book makes a perfect gift.

The Official Chuck Norris Fact Book is a fun book, but it also gives a great deal of insight into the man behind the fact phenomenon. Each of the 101 Chuck Norris Facts in the book is supplemented by a true story from Chuck Norris himself. After that bit of trivia is a quote pertaining to the story, and the end of each entry gives the corresponding core value from Chuck’s Code–Norris’ five core values he lives by: Freedom, Family, Fitness, Faith, and Fight–and a sentence or two that goes with it.

Throughout the book, Norris offers opinions and trivia on everything from his movie career to his family to nutrition. The reader comes away with a greater understanding of Norris’ deep-seated Christianity, his patriotism, his support of the military, and his belief that people must work not only to improve themselves but the world around them as well.

The humor in this book had me laughing many times, but Norris also touched on some topics that hit home and made me see things I could improve in my own life. I was particularly impressed with his openness about his failures as well as his successes. His belief that everyone has the opportunity to change their corner of the world is inspiring, especially since the stories in this book show how one person can make a huge difference in the lives of countless people. The many reminders that God sees each of us as His own special creation and has a plan for each and every one of us are uplifting. I highly recommend The Official Chuck Norris Fact Book for anyone looking for a book that leaves the reader with hope for a better world and a better relationship with God and family.